The Workers of the World Are Uniting 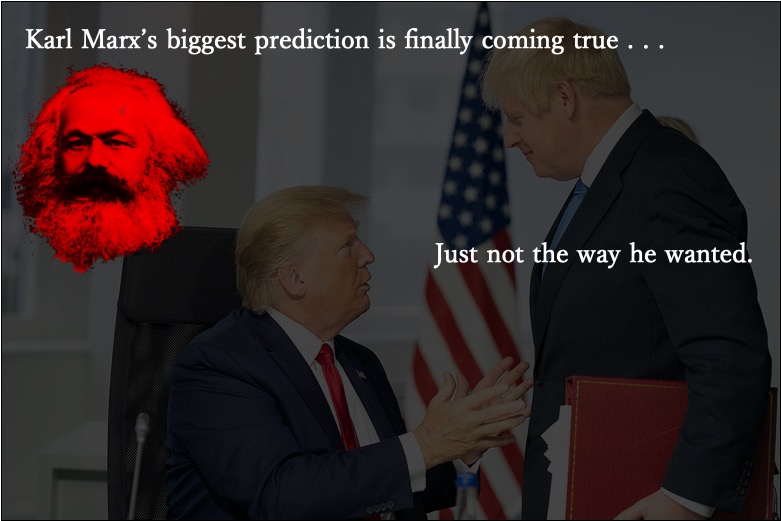 Not for socialism, but against it.

On the day of the big 2019 election win for Boris Johnson, the Tories, and every Leaver in Britain, Katie Hopkins tweeted the following:

Katie Hopkins @KTHopkins Dec 13
Your party? Hold on a minute sister. I think you will find it’s OUR party now. Britain has Boris and a blue collar army. Nationalism is back. British people first.

The phrase blue-collar army rang in my brain, and set off a rapid chain of thoughts that led to a revelation of sorts. First, a little background . . .

Though many thinkers were involved in the formation of socialist ideology in the 19th century, none was more influential than Karl Marx. He was not just the modern left’s most seminal figure, he was also its biggest—and most failed—prophet. His writings were punctuated by a number of predictions, most of which turned out to be colossally wrong—leaving generations of leftists scrambling to revise Marx and cover for his errors over the course of the subsequent 150 years.

Of Marx’s failed prophesies, the single biggest was that the “workers of the world” would—soon, from his standpoint—rise up in revolutions across the globe, bringing about the “dictatorship of the proletariat” and instantiating socialism as the penultimate step on the road to pure communist utopia.

It didn’t happen. Capitalism was making the lives of the workers of the world better, not worse. Naturally, they wanted better working conditions and higher wages, but they had no intention of revolting on behalf of socialism. This, of course, was an opportunity for leftists—faced with mounting evidence that socialism’s central ideas were wrong—to chart a different course.

Instead, they set about creating a series of revisions of Marx’s original premises:

The workers of the world aren’t revolting, but hey—a revolutionary vanguard of intellectuals and key military personnel can do it for them!
(Lenin, Mao, et al)

The workers will revolt, but only after we’ve gone on our ‘long march through the institutions.’
(Gramsci, Lukács, western Marxists, et al)

Check it out, guys—I have the ultimate ‘victim’ of ‘oppression’: the Earth itself. And the best part? The ‘oppressor’ is every single human being on the planet. The way they eat, live, travel, and work. The very air they exhale. We’ll be able to control everything!
(The leftist-environmental movement)

We’ve been living under the tyranny of the last three revisions ever since. The workers didn’t revolt, so leftist intellectuals have been waging war on societies across the globe, putatively on workers’ behalf, ever since. Socialism fails wherever it is tried. The more complete applications of socialism murdered and starved well over 100 million people. But the western left marches merrily on,

The Pretense of Concern

The rise of socialism as an intellectual phenomenon is unsurprising, and perhaps even understandable. We spent the 17th–19th centuries in a necessary and hard-won effort to end the phenomenon of hereditary inequality, only to see it replaced with a new form of inequality. The rise of capitalism was enabling some people to become fabulously wealthy while others remained terribly poor.

This, of course, was actually good news for humanity: Success was no longer limited to those of noble birth; it was now within anyone’s reach. But for many, it was still a bitter pill to swallow. We hadn’t done away with inequality: hereditary class was simply replaced by monetary class. Evidence is mounting that a dislike of inequality (the Gini coefficient) is deeply rooted in the human species. Add in our natural compassion for those still languishing in poverty, and the development of socialism as an ideological movement seems almost inevitable.

As a political movement, however, socialism was never particularly concerned for the well-being of the individual human person. At its core a collectivist ideology, leftism sees individuals as subsets of groups, which serve as vehicles for power or targets for punishment or elimination. Individuals are nothing more than eggs in the socialist omelet—to be broken and subsumed into the larger project.

If early socialists had truly cared about “the workers,” they would have taken note of what the workers actually wanted. Free-market economics was making their lives better (and still is, with extreme poverty dropping from 60% to 10% worldwide in the last half century). Even with the dislocations of a globalizing economy, individual workers have shown little interest in fighting “capitalism.” But leftism long ago abandoned all but the pretense of concern for individual workers (even their short-lived flirtation with anti-globalism was mostly just protest for protest’s sake). Groups, classes, nations, and constant agitation are the route to power for an ideology that has never been able to achieve any of its (supposedly) noble objectives, but is quite good at taking control of institutions, people’s lives, and whole societies.

From Pretense to Contempt

Over the last century, the left’s attitude towards working-class human beings has slowly moved from carefully concealed disregard to open disdain. We hear it in the language they use. “Flyover country.” “Deplorables.” The great unwashed, un-cosmopolitan American, bitterly “cling[ing] to guns and religion.” Start asking city-dwelling lefties what they think of rural America, and you won’t have to wait long before hearing references to missing teeth.

University-educated intellectuals have long been the programmers of socialism’s ideological software, and but until recently, “workers” made up a large portion of its rank and file. Increasingly, this is no longer so. The average lefty today is richer, more likely to have a post-graduate degree, and less likely to hold what were long considered “working-class” jobs. Of course, the left continues to have a constituency among high-school dropouts, felons, welfare recipients, and—a perennial target since Tammany Hall—recent immigrants. But, other than being electoral vassals, these groups play little role in the intellectual life of the left. And beyond the subsistence-level crumbs and platitudes they are fed, they benefit very little from the redistribution machine the left has erected in place of once-limited government.

To show just how far the left has traveled away from Marx’s original proletariat-bourgeoisie dichotomy, “proles” is now an elitist term of derision. And, increasingly, “left” and “elite” are becoming roughly synonymous. Today’s poster-child member of the left isn’t a union electrician living in the heartland. It’s power-players flying to Davos in private jets, squawking about how the rest of us need to lower our standard of living. It’s a tenured college professor toeing the party line on “climate change” to keep the grant dollars flowing. It’s Hollywood actors and the heads of large corporations. It’s a loft-dwelling unemployed programmer with a man-bun calling everyone outside of city limits a “racist.”

The left’s thin veneer of lip service has now been pierced, revealing a seemingly bottomless supply of disdain and derision. And in nations across the world, “workers” are reacting . . .

Reacting to a mainstream culture that increasingly looks down on them.

Reacting to a globalized economy that has done its level best to leave them behind.

Reacting to attacks on industries that have long been their lifeblood—like the Obama and Clinton promises to wage “war” on coal.

Reacting to shocking increases in sexual assaults and officials too interested in virtue-signaling to take the steps needed to protect their sisters, daughters, mothers, and wives. (Europe and the UK)

Reacting to elitists in far-off capitals subjecting them to a toxic blend of disdain, disregard, paternalism, and unwanted control.

Reacting to being called a racist five times a day.

The “working classes” are lining up not behind the left, but behind a new movement. Trump. Brexit. Bojo. Eastern Europe, South America, India. Populist movements and leaders are springing up in countries in every quarter of the globe. It’s not an internationalist movement, but it is happening across the world, and it is driven in no small measure by workers in their respective countries. The elites continue to be shocked, even as its victories continue to pile up.

The specifics vary from country to country, driven by local cultural and political concerns. But they are all part of a worldwide trend. Sick of being lectured and controlled by supranational institutions and elites, calls are rising for a return to national sovereignty.

The left have reacted as if this all came out of a nowhere—a sudden and sinister return to the ugly nationalism of the 20th century. Whether intentionally disingenuous or simply lacking in self-awareness, this assessment misses the fact that leftism itself is the primary cause. People—in countries across the globe, with disparate cultures and concerns—didn’t suddenly decide, for no reason, to become more nationalist. This is backlash.

The left has long deemed “raising the consciousness” of the “working class” to be an essential operational goal. By insisting on open borders . . . declaring that some cultures are worth preserving and others aren’t . . . and increasingly describing average people as uniquely culpable for all the world’s sins for no reason other than their skin color . . . they’ve done exactly that. People who weren’t particularly culture- or race-conscious before are becoming so.

To hear the left describe it, the result is a world suddenly swarming with racists. Charges of “racism” are now thrown around so cavalierly that the word has been denuded of most of its actual meaning. As the cultural hegemony of western leftism approaches critical mass, this was inevitable. It is a power-tactic—the ultimate evolution of the oppressor-oppressed narrative as the primary replacement for Marx’s original dichotomy. Disturbingly, it has also taken on the character of a psychological tick—feeding the seemingly bottomless narcissism of self-styled warriors in the fight against “hate.”

Sadly, some actual racists have come out of the shadows to operate on the fringes of the worldwide national sovereignty movement—preying upon the uninformed and even reviving some ugly and absurd anti-Semitic tropes. This is a problem, but it is nowhere near as widespread as the left portrays . . . and the more they paint normal, non-racist, working people with that brush, the more they alienate what was once a natural constituency.

Local iterations of this movement are not always self-consciously conservative, with some adherents supporting policies that most ideologically grounded conservatives and libertarians have long opposed. And the phenomenon has certainly produced some unorthodox leaders. The biggest unifying factor appears to be a backlash against a supranational elite that does not have their best interests at heart. People are tired of the ideological, cultural, economic, and, increasingly, real violence the left is waging, and causing to be waged, on them. They’re tired of being labeled as “oppressors” by an ideology that is, in fact, oppressing them.

Perhaps not all of this movement’s outcomes will be good. But its existence is completely understandable, and, dare I say, even predictable. The left has no self-limiting principle—no way of telling itself, “This is as far as we should go.” Thus, the stronger it becomes, the more damage it does, and the nastier it gets towards those whom it identifies as enemies. It should come as no surprise that those “enemies” might, at some point, get sick of it.

Congratulations, Karl Marx. You predicted that the workers of the world would rise up, and it’s finally happening.

Only not the way you thought.