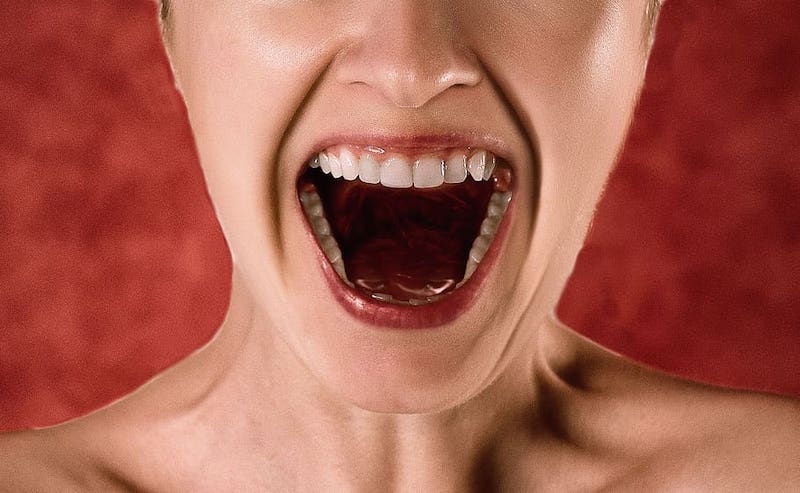 I got into a verbal altercation yesterday at Walmart. Setup . . .

For some reason, in spite of the fact that I live on the edge of farm/hunting country in western NY state, mask compliance appears to be over 99%. (I expect farmers and hunters to be a little more freedom-loving and better-informed!) When I am out, I am one of a tiny number of people not wearing a mask. (For those still suffering from mass-formation hypnosis, there was zero difference in health outcomes between counties and states with strict masking rules/compliance and those without. It was, at best, all kabuki, and possibly something more sinister.)

I spoke with the two other mask-refusers I saw out of the hundreds shopping in our super Walmart yesterday—in one case, we reacted to each other as if we knew a secret, as if we were wide-awake wolves in a world of sleeping sheep. As if we were—for those who get the They Live reference—wearing Hoffman Lenses. I hate to have that outlook—to belittle my fellow humans in that way—but it is frustrating to see them all asleep: addled victims of what is, in the most charitable reading, a giant lie, and what certainly is beginning to feel like a colossal p$y-øp. Anyway . . .

My wife had just picked a register line when I came running up with the butter we had forgotten and I had run to get. It was one of the new self-checkout lines that looks like a normal manned register, but with an extra-long conveyor belt and self-checkout system.

There was a woman at the far end, in front of the card-swiper (well over six feet away). There were a couple of non-food items at the far extreme of the conveyor belt, but they were not moving because they were sitting on the metal structure at the end of the belt. This, coupled with her position near the card-swiper and her fully reloaded cart pointed towards the exit doors, caused me to assume that she was done, and that those items had been left by someone else. So I stepped forward just far enough to place the boxes of cold butter onto the far left end of the conveyor belt, in anticipation of her imminent departure. (Note, I was behind Walmart’s blue social-distancing indicator decal on the floor.)

“Excuse me; I’m not done,” snapped the panicked and angry Karen.

“Sorry; I thought someone else had left those,” I replied, removing my butter and stepping back even further. She snatched her items from their perch and placed them onto the conveyor, which began carrying them towards the other end. Realizing the ultimate source of this unnecessary panic, I was irritated, but I did not confront her. No predatory stare, no nothing. I deliberately looked down at the ground to avoid conflict with the poor misled Karen. One does not go into a field and yell at sheep for being sheep.

However, I still did not want to hold the butter. So, I waited until her items had traveled the length of the conveyor and stopped at the far end, near the card-swiper. Once they had, I placed my butter back at the far left end of the now-motionless conveyor. I was still behind the blue panic-square, well over six feet away.

I was entirely conscious of my own rationale. I did not want to hold the butter, but I also did not want to frighten the poor Karen with the possibility that the butter—which she no doubt imagined I had smeared with the bubonic plague that was oozing from my greasy, Aqualung-like fingers—would come anywhere near her stuff.

This is when her friend chimed in, snapping “You know we’re supposed to be social distancing.”

My wife and I both looked down at the blue terror-square. “We’re behind the box,” she and I both said, in roughly the same words, and roughly simultaneously.

“I said that I thought those belonged to someone else,” I retorted, somewhat hotly. “I thought you were done. I did not ‘step up’ on you.” At this point my wife said she was going to a different line and bailed! But the women were not done berating me. The rest of the dialogue is something of a blur, but essentially consisted of them yelling at me for not social-distancing and me repeatedly pointing to the blue coward-square on the floor and reiterating that I had never crossed it. (And I hadn’t—it was right at the far end of the conveyor belt, close enough for me to place my plague-butter on the belt without needing to cross it. I did not even need to use the extra reach afforded me by my gangly, gibbon-like arms.) Finally, once I had established in the immovable fact that I had never once crossed the blue line of death, they had the audacity to tell me to stop making it a big deal.

Needless to say, the fact that I was not wearing a mask is what primed them for panic-rage. They have been conditioned, misled, and propagandized. They have been filled with fear and lies. I should have taken that into account and responded more irenically. But the fact that they were wrong—that I had never moved within even nine feet of them, let alone six—left me with less patience and aplomb than I would have liked.